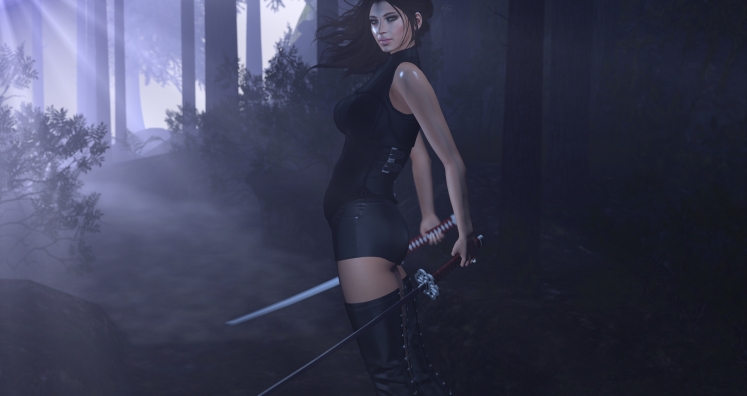 The assassin stood at what he felt was a safe distance. He had heard whisper that this might be where she was to be found, but had scarce believed it. She stood alone in the forest clearing, statue-like, eyes closed and head tilted upwards, at the very moment when the sun started to rise, sending weak beams of light between branches, illuminating her, and the rising mist with the ethereal beauty of a new day.

Her name had been on his list to… remove.. for so long, but he had never got anywhere close to actually seeing her. For what seemed like forever, and across many countries, he had always been just a few steps behind her as she deftly evaded him, seemingly without any difficulty at all. He had even begun to doubt whether she was even aware of his pursuit.

Yet now he watched her silently as she went through some kind of training regime. Truth be told he couldn’t tell if it was the art of fight or dance, she had such ease and grace to each movement. His breath caught in his throat as he felt himself step from the steely grasp of his silent watchfulness, swept away in the beauty of each step from his quarry as she moved with ease and beauty amongst the trees.

There was no doubt that her fine katanas were sharp. They cut the air with barely any sound at all. It was also evident that this woman was indeed expert in her use of them, for not at any time did a blade so much as caress a leaf or twig of the forest surroundings, leaving everything untouched as the woman pirouetted and stepped barely creating even the slightest indentation of a toe in the spongy undergrowth.

She stopped, and his throat grew dry. He realised his own moment of danger too late, his weapons just out of reach on the forest floor where he had placed them on arrival. He kept his eyes on the woman whilst silently reaching a hand to the side, fingers seeking the security of the hilt of his own sword. His eyes flicked from the woman for only the briefest of seconds, but her voice came clear into the morning air: “You had better be as fast with that sword as your reputation claims!” His hand fastened around sword and he lifted it, standing clear of the undergrowth he had hoped had hidden him.

The woman had turned and readied herself, swords poised as they gleamed in the light of the beginning day. “Lesson one… if you hope to sneak up unannounced, ensure your stench does not give you away before the sound of your clumsy footsteps ever could!”

I couldn’t resist the temptation to let my writing wander a little, inspired by this strong and wonderful pose from Gingerfish poses, which also comes with Katanas included. Further details at: https://www.flickr.com/photos/tracyredangel/48499173081/in/dateposted/

The head is my usual Ariel from LOGO. I am unashamedly a LOGO gal, and LOVE the expressions LOGO heads give me.

I rummaged in my inventory for the rest of the apparel. The Roxy boots are from the collaboration between Gos and Lybra which was for a Gacha a little while back. The Bella Leather shorts are also from Gos. The gorgeous corset is one from Atreum. The vento hair is from Tableau Vivant.