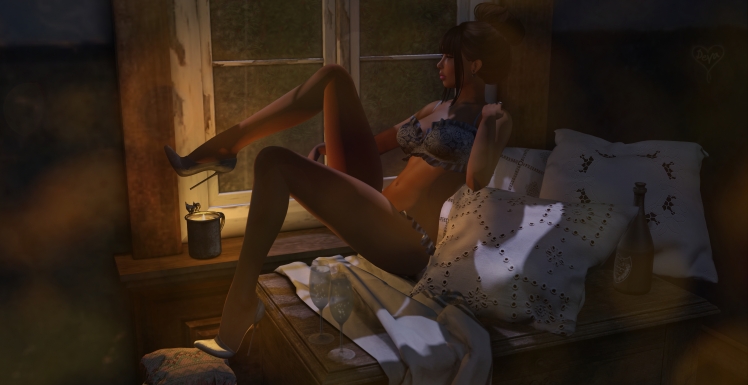 She smiled as she looked at her reflection in the mirror, twisting this way, and that. A soft chuckle escaped her lips as she spoke to her reflection. “Oh yes… I am pretty sure he will appreciate the outfit.” She tugged gently at the frills which adorned the blue lingerie she had chosen especially for his home-coming.

She crossed the room and turned out the light, raising a brow as she let her eyes adjust to the soft blue moonlight which flowed through the window and softened the outlines of the pillows and throw she had arranged. They almost seemed to glow in cosy invitation, but she was not yet finished with the scene she wished to greet her Love with as he returned home.

It took small effort to remove the cork from the perfectly chilled champagne, before she filled two glasses and set them down on the trunk which she had chosen to be her vantage point. To sit and wait there would give her a clear view of him approaching.

She was the final part of his presented gift, and she slid herself onto the seat and settled back into the cushions to await him. She shifted a little and leaned against the window frame, her warm breath causing small circles of excited cloud against the dark of the night-chilled glass.

She slid the toe of her shoe against the wood of the frame, her eyes following its point tracking along the lines of grain. Just as she had spent their time apart, part of her mind was always with him. Days had passed, events come and gone in his absence, but each had been recorded, experiences to be shared once they were back together.

She smiled… yes, there would be much to spend time talking about… eventually.