Mora saw the guards on the gate whispering, and her interest awoken she went to see what the news was.

They nodded to her in recognition as she approached.

“Mayhap Mora will know of his plans…” one of them finished saying, and both of the men turned to look at her.

Mora folded her arms and grinned up at the men. “Oh come on now, boys… you have to give me a little more than that? Know about whose plans?”

Peter dropped his voice a little, and looked about them before answering “That mad boy king.” he whispered.

Mora’s jaw set and her fists balled at her side. “Pyrite? What’s he up to now?”

The other joined in now. “He delivered a letter here the other day for the lady Minn.”

“Brought his new creature with him.” Peter added.

“It’s a strange thing for him to deliver a letter.” Mora mused. “It’s usually more his…. style… to simply storm the village and stamp his little foot. This is… odd.” She didn’t share further thoughts with the guards, but couldn’t help wondering why Pyrite had taken to using written words.

As the day wore on, she couldn’t shift the worry which niggled at her over this. Perhaps… it was time to take more interest in what the boy king was up to.

She waited until the night came, then opened the wooden chest in her chamber and took from it small garments made of black leather. They were old and showed damage to their surface in places, but the fairy smiled as she slipped on their familiar covering, favouring them at this time over her fine dress.

She stepped out onto her balcony and flapped her wings, lifting herself easily to the rooftop. She turned her face up to the moon and closed her eyes. Dropping her hands to her side, she relaxed her glamour, letting it slide slowly from her body like a light silk garment.

If any of the villagers had been able to see the fairy up on the roof, they would have seen her seem to disappear to their eyesight.

Mora opened her eyes and smiled, running her tongue down the side of one of her sharp teeth as she held her arm out and twisted it this way then that, the glittery sheen of her blue-green skin reflecting the moonlight.

“Now.. to see what he’s up to” she whispered and opened her wings. Gone were the fragile-looking butterfly wings, replaced by thick feathered and glossy black ones. She couldn’t help but grin as she quickly gained height, her strong wings as silent as they were powerful.

It had been too long since she had dropped her glamour. She was too proud of who she was to hide the fact she had wings and long ears in the human village, but knew many would show fear at her true self.

It was the only way to glide unseen through the trees and see what Pyrite was up to. She landed in the cover of trees, but close enough to his encampment to both hear and see all she needed. There was the milling about of a few imps and his assorted riff raff minions, but nothing seemed different than it had. There were perhaps a greater number, but no real organisation to them.

She flew back to the village and landed silently on her balcony, stepping inside the house and closing her eyes as she veiled herself in the light of Mora as all knew her to be. She smiled wide as she looked up to Viola the bluebird who watched her from the rafters. “Well, whatever he has planned, we will be ready, huh?” 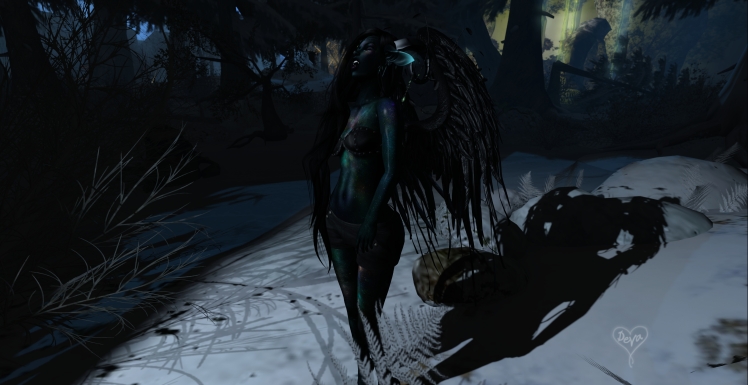