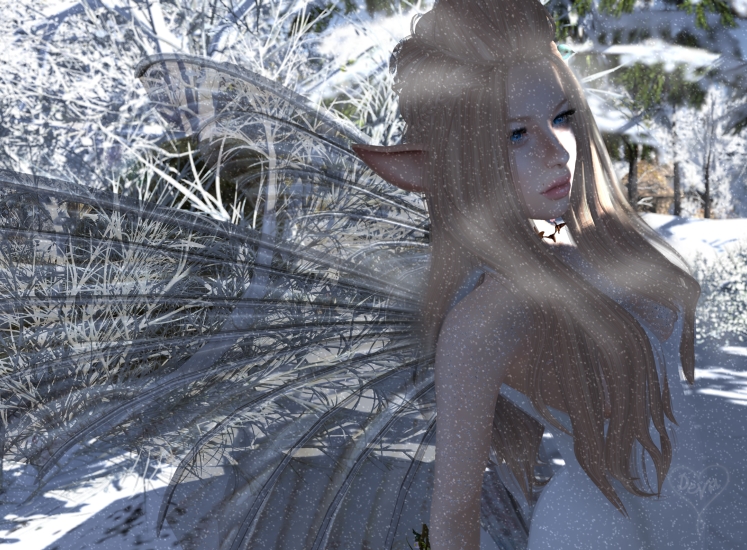 She turned her face into the freezing wind. Each flake pierced her skin with its freezing bite, the gale stealing her breath and hammering her hard in equal measure. To hold her eyes open brought tears which augmented her feelings as they froze, but closing them only brought a barrage of driving flakes which collected on her lashes and threatened to seal her eyes closed.

The fairy allowed herself to feel the cold. It was not normally a worry to her, but everything seemed to have changed for her and for once warming herself seemed too much effort. This was what winter felt like to others. This is how small creatures could perish.

Viola, the bluebird hopped from Mora’s shoulder to her ear and back again. She didn’t want to be in this blizzard, but neither did she want to leave the fairy alone. She pecked at the fairy’s skin and chirped loudly, trying to rouse her from her thoughts. Her efforts seemed useless, so she withdrew to the shelter of where Mora’s hair hung over her neck.

Mora’s thoughts drew her deeper inside herself. His ship had finally returned to Briarhaven, but without him. None on board had seen or heard of him and they had been forced to return before the weather got too bad to make the journey.

Mora ‘stood’ in the dark at the core of her heart. The conscious train of her thought sought to defend her actions. She had kept her faith in him… in them both. She had waited so long, so sure he would return. Now it seemed as though it had all been in vain. She had remained in the village, with those who didn’t always trust her, but whom she had sought to protect, and spread joy to.

“You forget who you are!” came the voice. It spoke to her from the deep warmth of the fairy. It came warm from the spark which linked her to the trees and plants. Just as the earth stayed dormant through the winter, her true self had never left her, but had been there always with her.

Mora shivered slightly as she felt her glamour ripple slightly, a sheen of blue-green traveling over her skin. “There must be balance to all things. You know this. Remain in the village. Show them not all are as they expect them to be. Watch and protect those who need it.” The voice spoke from the centre of her heart and warmed her as the confidence of the words spoken spread.

“Come on, Viola!” Mora finally said out loud, and cupped a hand around the bluebird to shield her. “Let’s get you back in the warmth of the house.” Mora spread her wings and allowed the wind to lift her slightly, before allowing her to glide back onto her balcony.