Mora busied herself with tending for the plants which grew outside her doorway. To many she seemed a strange creature, who would often be found in conversation with birds and animals she would encounter, but nothing caused eyebrows to raise quite so high as to find her talking to plants. At least an animal might offer some kind of noise in reply…. but plants?

There was method to her actions though. If bystanders had lingered enough to hear her actual words, they might detect that the words were not always to the plant itself. There were times when one of the fairy’s hands would be on the soil or plant and the other would be around the crystal which hung at her neck. At these times her words were not as useful as the joining of her will with that of her kin, a tugging at the weave to boost or bend plants to her wishes.

This morning in Briarhaven, her concern was, as always for her Love though. It had been many weeks since Tal had gone from her side and he was sorely missed.

She ran her fingertips along the leaf of the rose that grew there. “I know. I miss him too.” She crouched down a little as if to whisper a secret to the plant. The fairy closed her eyes as her fingers closed around her crystal amulet. ” Carry my love to him, keep him safe…. and bring him home soon.” Her sensitive ears could almost feel the imagined hum of her wishes as they flowed into the plant, through its stem, down into its roots and out into the soil around it. “Wherever he is, however far he is, bring him home safe to me, please.”

Mora opened her eyes again and smiled at the rose, placing a light kiss on one of its newly opened blooms. She let its perfume surround her and lift her spirits as she stood once more, basking in the morning light and let the promise of a new day in Briarhaven let her heart soar. 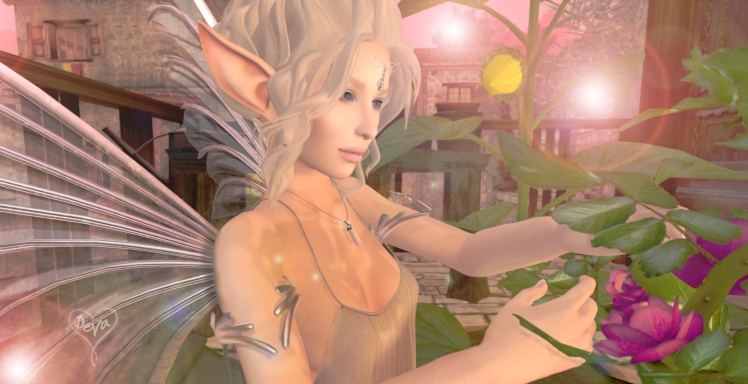 (A piece written about my character Mora, from Briarhaven)

One thought on “Words from the heart of a fairy”